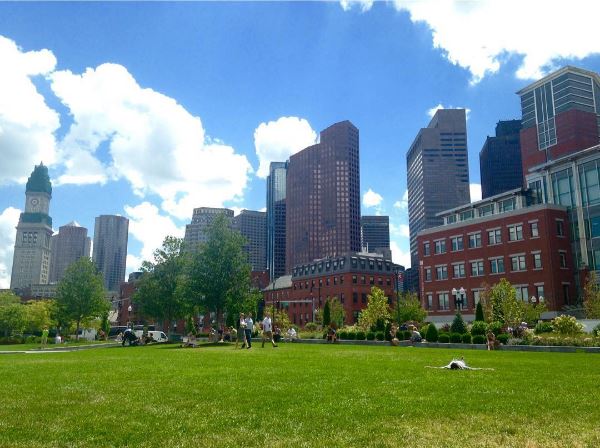 Since 2008, the 1.5 mile, 15 acre The Rose Fitzgerald Kennedy Greenway has been one of Boston’s most popular destinations for catching sun, grabbing a bite to eat or attending one of the greenway’s events like Boston Calling, Berklee’s Summer Concerts or the Farmer’s Market. Since this wonderful space happens to be just one block from One Greenway, we wanted to highlight some of the great events happening this summer! There are over 300 free events per year, so we’ve narrowed it down to our top five favorites:

What better way to kick off your Thursday night and the coming weekend than by some catching up and coming musicians from around the Boston area? No matter what music you’re into, there’s sure to be an act playing that’ll excite your ears. Dewey Square is just a seven minute walk from One Greenway.

Rowes Wharf Plaza, across from the Boston Harbor Hotel

Join the Rose Fitzgerald Kennedy Greenway Conservancy staff to learn more about the land around you during monthly lunch-time tours of this beautiful 1.5-mile stretch of green. The next one is taking place on June 24th at 12pm at the Rowes Wharf Plaza across from Boston Harbor Hotel (only a 15 minute walk from One Greenway) so be sure to register for the upcoming tour at Eventbrite and.

When it comes to finding delicious eats around One Greenway, look no further than the Rose Kennedy Greenway. Craving street style tacos? North East of the Border is serving up some of the best street tacos around and their intricately painted truck is sure to catch your eye. Maybe you’re looking for the simplicity of a little chicken and rice; luckily The Chicken & Rice Guys are dishing out gyros and plates. The food trucks of the Greenway stretch from the North End to the Gates of Chinatown so they’re easily accessible from One Greenway by foot or by the Orange line depending on the schedule.

The Grassy area at the corner of Cross & Hanover St.

Yoga is a great way to increase flexibility, reduce stress and maintain a healthy lifestyle. So what better way to spend a lunch break or relax after a long day at the office than by attending this free class? Across from Haymarket, this great class is only a couple of stops away on the Orange line and it’s free.

Social Boston Sports offers athletes a weekly cornhole league every Thursday nights from 6p-8p. This isn’t just your average backyard BBQ game anymore; just a quick trip on the Orange line from One Greenway, it’s sure to peak your competitive side! Cornhole is a team sport so make sure you bring your friends, or plan on making some new ones for this 2 vs 2 cornhole competition. So grab your competitive spirit and let the games begin!