Food Truck Season Is Back at One Greenway 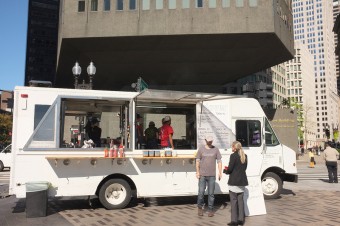 While the winter of 2016 was a walk in the park compared to last winter’s record-breaking snow and cold, we always look forward to one of the surest signs of spring in downtown Boston—the return of the food trucks to the Rose Kennedy Greenway.

Located just steps from One Greenway, the Rose Kennedy Greenway is a mile and a half-long string of parks in the heart of Boston. While the Greenway is beautiful in all seasons, the parks truly come alive when food trucks set up shop in various locations. The Boston Globe reports that the Greenway is the coveted location for food trucks around the city, and there are several new trucks to be found in 2016 as well. (Hardcore food truck fans won’t want to miss the Food Truck Festival on April 23.)

We love having all the food trucks just a few steps from One Greenway, but there are a few dishes we think you have to try:

Coffee and gourmet baked goods at Quebrada: This bakery’s brick and mortars are a favorite of families in the suburbs west of Boston, but now their incredible baked goods are available downtown. Try the coffee cake!

The Combo Plate at Chicken & Rice Guys: This dish recently won Boston magazine’s Starch Madness competition over several other carbohydrate-rich competitors and it’s no surprise—warm meat with fluffy rice and your choice of spicy or cool sauces makes this a satisfying meal.

Tortas at Tenoch: It’s not the size of the food truck: It’s what you do with it. This tiny trailer attracts long lines with big Mexican flavors.

The Double Awesome at Mei Mei: Mei Mei creates inventive, farm-focused Chinese-American food and has given perhaps history’s greatest hangover helper to Boston: The Double Awesome. It’s a scallion pancake topped with pesto, cheddar and two soft-boiled eggs. Make it even more satisfying with bacon, turkey or ham and you’re back in business after a long night out.

These are just a few of our favorites—share your can’t-miss nosh with us on Twitter!