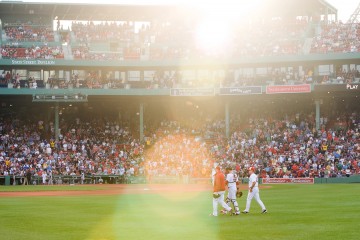 When you think about Boston, you immediately picture the skyline of Boston with the Prudential Tower, Zakim Bridge and the TD Garden. Images of Duck Tours cruising down the Charles River and people running along its banks flood your brain. But what many visitors and residents really associate Boston with is an iconic landmark, the oldest baseball park in America, and home to one of the oldest baseball teams in America: Fenway Park and the Boston Red Sox. In honor of the Red Sox Opening Day, we here at One Greenway wanted to dish out some of our favorite fun facts about the Red Sox and the city’s most beloved icon, Fenway Park.

Most baseball fans know the team and the ballpark pretty well. Fenway Park opened in 1912, making it the oldest ballpark in America. Maybe you even know that the Red Sox’s original name was The Boston Americans, but did you know that the Boston Americans won the first World Series against the Pittsburgh Pirates, or that their first night game was played in 1947?

Every good baseball team has good and bad seasons, and the Red Sox are not immune to this. From errors such as the sale of Babe Ruth to the Yankees in 1918, harboring in 86 years of the “Curse of the Bambino,” to Bill Buckner’s iconic miss of a ground ball in Game 6 of the 1986 World Series; the Sox have seen it all. But from those errors came: Carlton Fisk’s famous home run in Game 6 of the 1975 World Series, which was considered the best game of baseball ever played and the breaking of the curse in 2004 when we won the World Series. Even better was in 1941 when Sox slugger Ted Williams had a historic season batting average of .406 and in the last game of his career, knocked it out of the park with a 440-foot home run.

When you experience Fenway Park and the Boston Red Sox you aren’t just stepping back in time by walking into the park and sitting in those green seats. Even the famous song “Tessie” by the Dropkick Murphy’s that’s played after every Red Sox win (right after “Dirty Water”) has historic ties to Fenway, as the original version was sung by the Boston Americans’ fan club the Royal Roosters and is accredited to that 1903 win over the Pittsburgh Pirates. That’s what makes Fenway such a special place: whether you’re a Sox fan or even a fan of the rival New York Yankees, you can appreciate the history of the park and enjoy a game on a sunny afternoon or warm night. Fenway Park is in the heart of the city just as One Greenway is and the fact that the two of us are so close together brings our neighborhoods closer together.

This year’s Boston Red Sox will take the field fully aware of the history of their club and the larger than life, legendary figures that have walked out of the first base line dugout, including slugger David Ortiz, who retires at the end of the 2016 season. So with all that being said, One Greenway says, Let’s Go Red Sox!