Holiday Shopping Near One Greenway 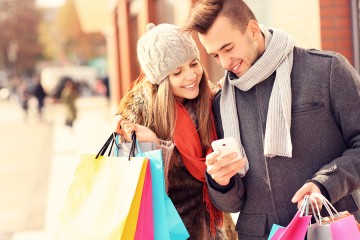 One of our favorite things about the holidays is strolling around Boston, looking at the festive decorations and getting into the spirit of the season. One Greenway residents have some of the city’s best shopping a short walk from their front door. Here’s a suggested route from One Greenway for a day of shopping—do as little or as much as you like!

Starting from One Greenway, take a short stroll to Primark. The European discount retailer opened in the former Filene’s building earlier this year. Here, you’ll find clothes for everyone on your list, as well as trendy décor and cosmetics that will fill your family’s stockings for an amazingly low price. (You will likely pick up a few things for yourself as well. It’s OK—you’ve earned it.)

From there, cross the street to enjoy Macy’s beautiful holiday window displays. This year, they feature a tribute to A Charlie Brown Christmas on its 50th anniversary. Once you’re inside the store, you’ll find everything the perfume for your mom to the Ralph Loren sweater for your dad.

Take a break from shopping as you stroll through the Boston Common and Boston Public Garden. Swing by the Frog Pond to see skaters showing their stuff on the ice. The park is decorated with lights and bustles with holiday shoppers like you running your errands.

Once you’re done in the historic parks, it’s time for a coffee break. Visit The Thinking Cup on Newbury Street for a restorative snack and espresso as you see what’s left on your shopping list. From there, you have all of Newbury Street to explore. Pick up the quintessential Boston gift of a Gurgling Cod at Shreve, Crump & Low, or a hat from Goorin Bros.

If there’s a chill in the air, it’s time to hit the mall. Copley Place and the Shops at the Prudential Center offer high-end retailers in a climate controlled setting. (You can walk between the two malls without even popping outside.) Grab a photo with Santa in the Prudential Center while you’re out.

By now, you’ve likely checked most of the gifts off your list. Head to the new City Target in the Fenway to pick up wrapping paper, bows and bags. Then hop in a cab back to One Greenway to get ready to enjoy the holiday!

Prefer to do your shopping online? We’ll sign for your deliveries and drop them off in your apartment.