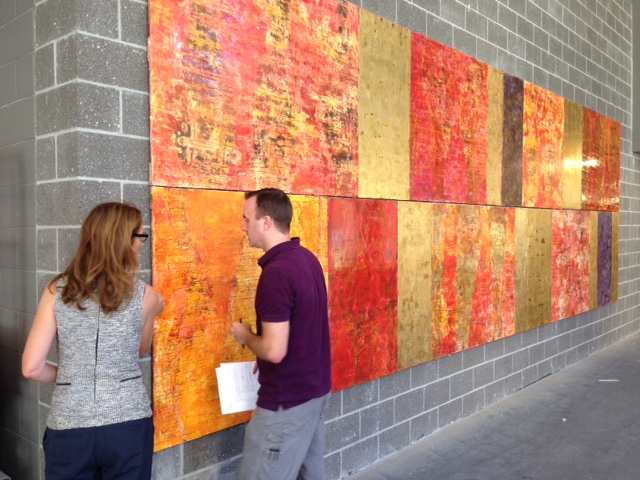 It’s been an exciting time for public art in Boston. A Translation from One Language to Another is in place on the Rose Kennedy Greenway in Dewey Square. Locals and tourists alike are still captivated by Janet Echelman’s As If It Were Already Here and Kyu Seok Oh’s Wandering Sheep.

One Greenway is proud to be home to another piece of stunning public art in downtown Boston. We watched as the piece Parcel 24 by Sara Egan was installed at the entrance to the building. But Egan prefers that you not call the piece public art.

“When you go to Rome no one is talking about Public Art—they just talk about how beautiful everything is,” Egan says. She views art outside the context of a museum as an effort to reclaim the public space from advertising and corporate imagery and bringing something that challenges the viewer back to the public sphere.

Parcel 24, the title referencing the name of the site that is now One Greenway, aims to capture the energy of the community that surrounds it. The 40-foot long frieze is composed of 31 smaller panels, all made by hand.

We’re thrilled to be the home of Egan’s latest work. Check out the pictures from the installation process below. You can read more about Boston’s public art scene—and Egan’s Parcel 24—in the Improper Bostonian.